The photogrammetry is the science of making measurements from photographs, especially for recovering the exact positions of surface points. From these data collected, specific softwares can build a complex mesh to reproduce in 3D the subject photographed. This process is very useful to make quickly and accurately an architectural survey of a complex sculpture. Also the photogrammetry process can reproduce the texture of the subject by mapping it, which is useful in rendering for example. The statue of King Leopold I, exposed in the the Royal Museums of Fine Arts of Belgium, in Brussels, will serve us to illustrate this method. 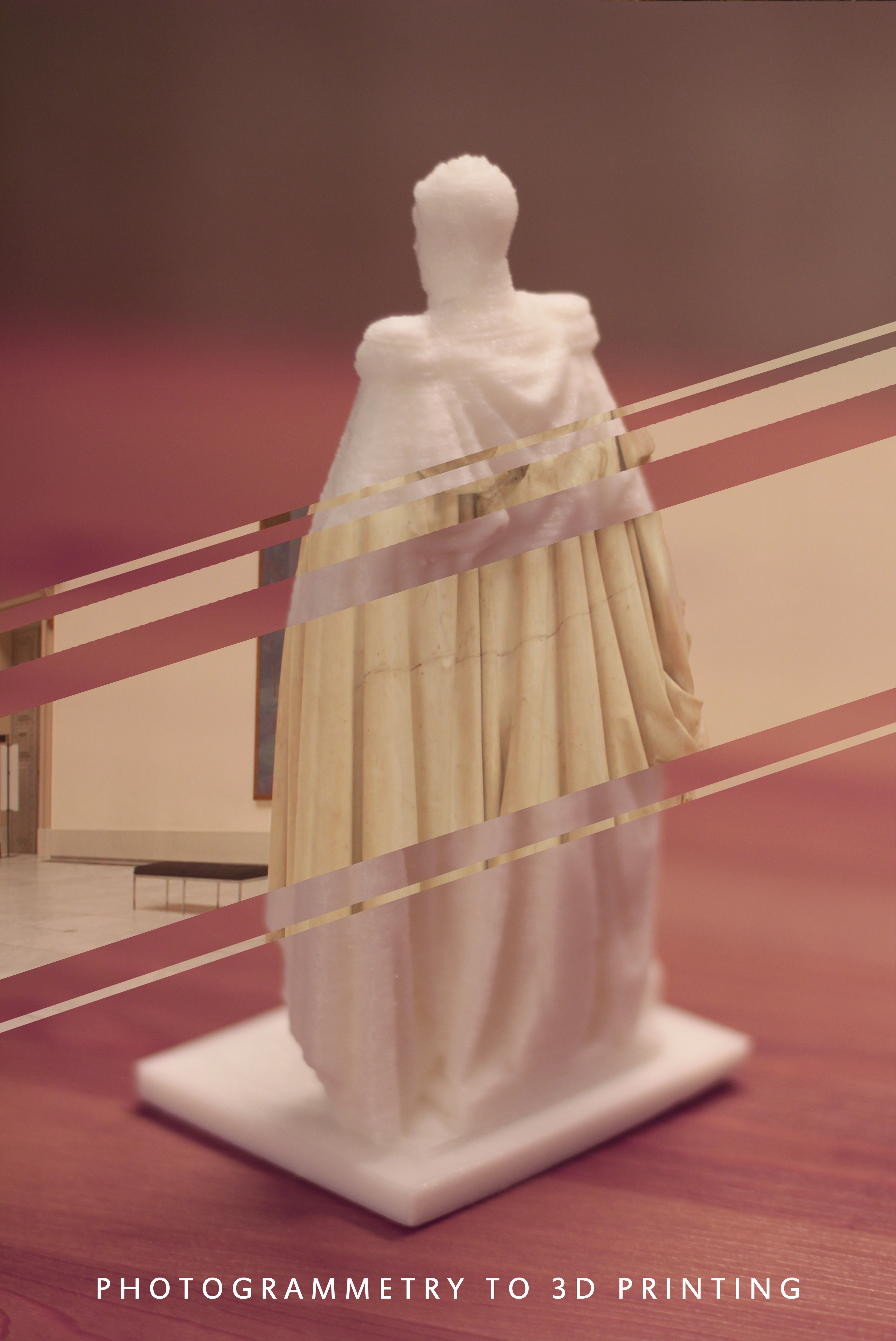 First of all, we have to take approximately forty pictures of the subject, from different angles, while drawing a circle around the statue. As you can see here, we have done two complete revolutions, the first one with a first person view, and an other one with a view from below.

Then, we send all these pictures in a specific software, which will replace in a 3D space, each picture in its shot’s position. With those, the software makes a first scatter graph in three dimensions. So now, we’re starting to see the silhouette of our future model appearing.

After cleaning our previewed scatter graph by removing the useless points, we can launch the densification process. Now we got our final scatter graph, with around five millions points. As you can see, the final model is appearing clearly, but there are missed points on the statue’s shoulders, and on the top of the head. It’s because we didn’t give to the software the potographic material necessary to complete the task. 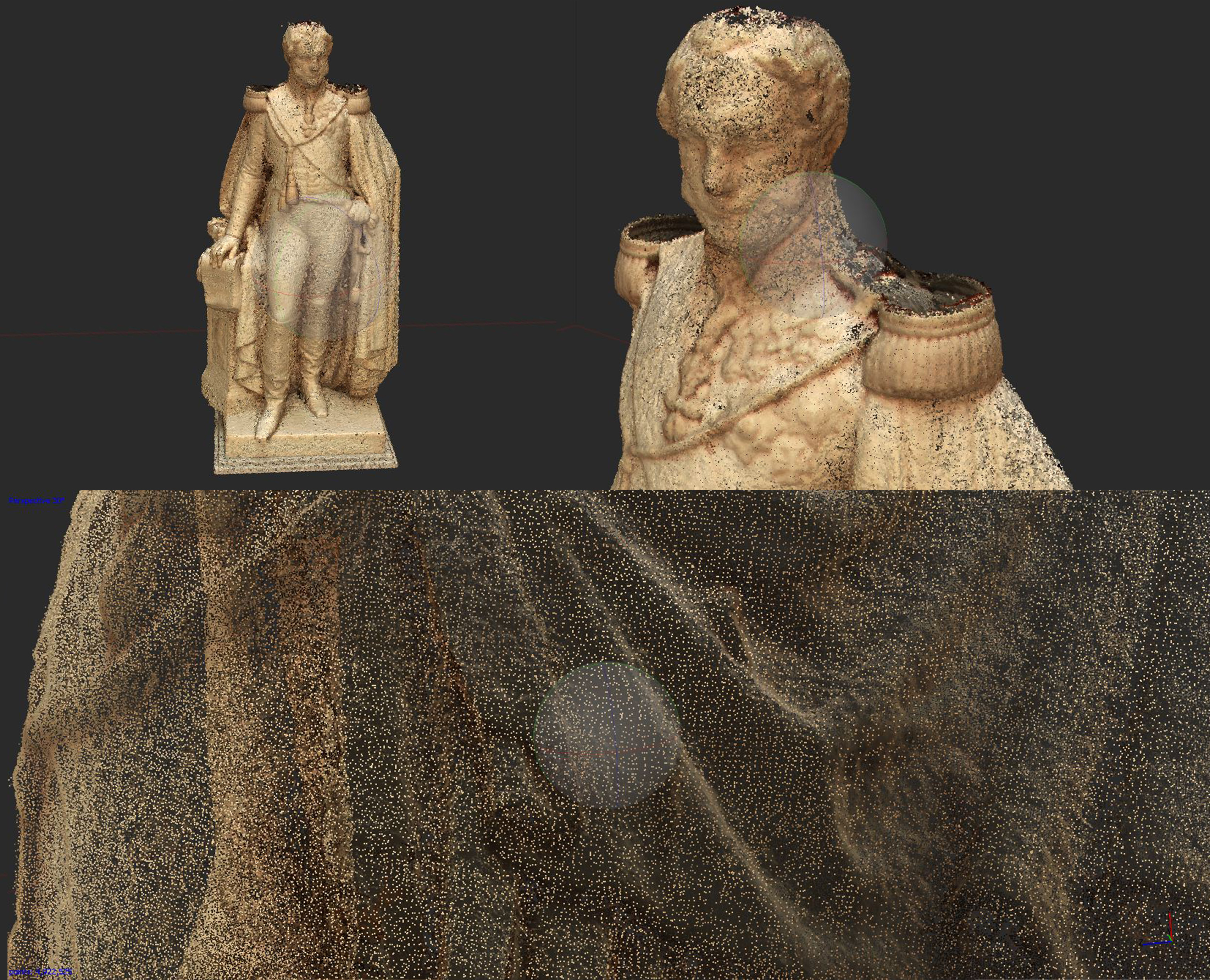 To solve this problem, we just ask to the software to join the extrem points around the hole and make a surface. We can do it in this case because the unknown zones are limited. If these zones were bigger, we would had to take new pictures. Now everything is fine to make a mesh. After processing, We’ve got a 3D model highlty detailled, and entirely made from pictures. 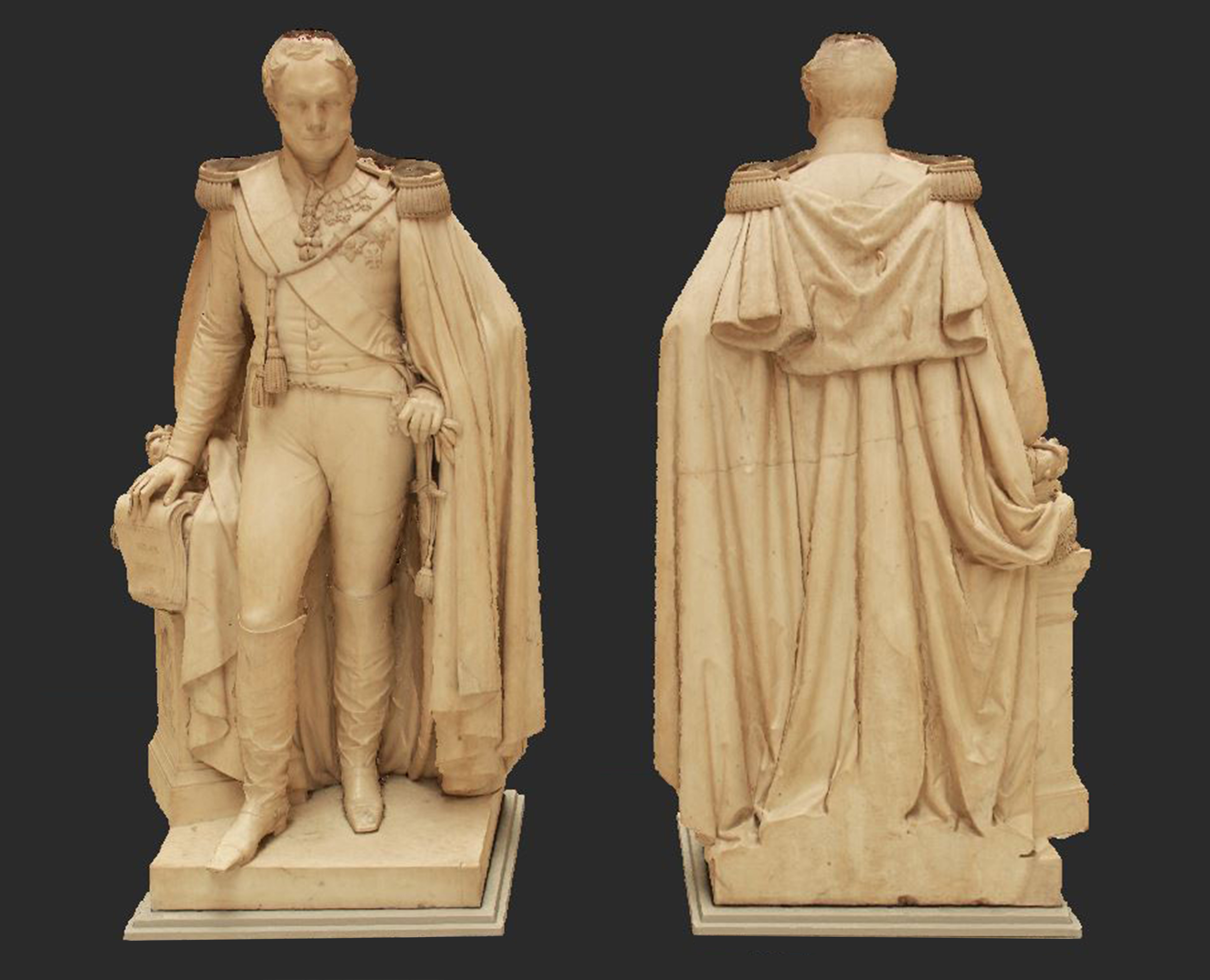 Then, we can use this 3D model to make a video animation as below.

You can also send this 3D file into a 3D printer to make a plastic figurine. This one is made in PLA 1.75 mm white filament and it’s filled at 90%. The printer’s precision is 0.2 mm and the model measures around 15 cm in height and 7 cm in width. Considering the fact that this figurine was produced from low quality picture, and despite its small size, this 3d print remains detailed enough to see the folds of the fabric or the character’s fingers 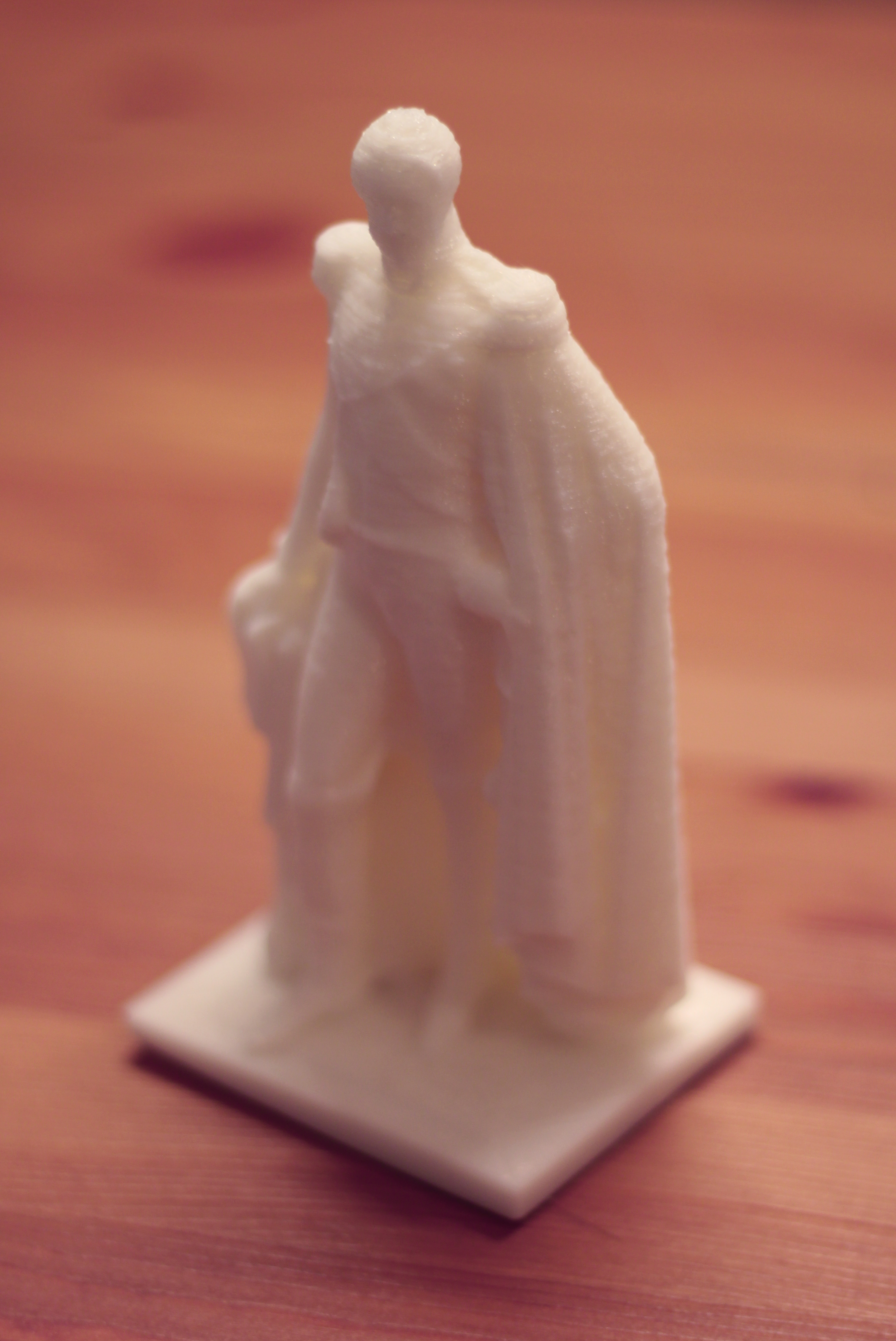 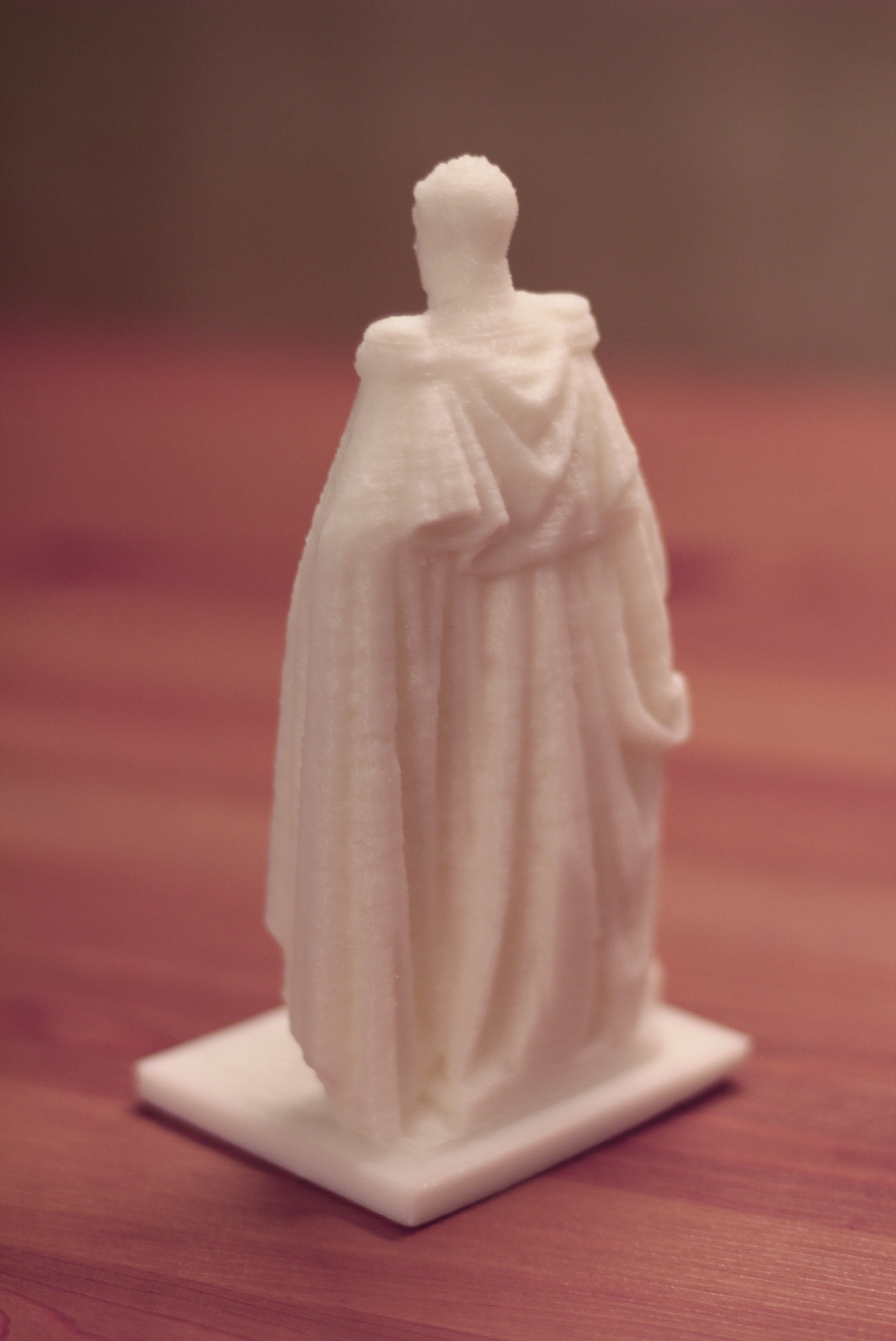